A stroll through history between the Alhambra and the Albaicín

The Alhambra and Albaicín are today closer than ever, joined together by the Dobla de Oro, a cultural tourism route promoted by the Council of the Alhambra and Generalife that seeks to strengthen the ties between the oldest neighbourhood in the city and the Alhambra Group of Monuments, both of which were declared World Heritage sites by the Unesco.
From the hill of La Sabika, on which the Alhambra stands, the Albaicín appears as a wash of white houses speckled by the vertical forms of cypress trees and bell towers of churches that once were mosques. From the Albaicín, by contrast, the Alhambra is a thick forest whose trees are crowned by the saffron walls of the Alcazaba, the Nasrid Palaces and their towers.

A walk around four monuments

This palace was the residence of the sultana Aixa, mother of Boabdil. It is structured around a central courtyard. In one of its sides we can see a lookout tower. It preserves beautiful plasterwork on the upper floor with inscriptions from the Nasrid period. After the conquest, Queen Isabel la Católica ceded this palace to the monastery of Santa Isabel la Real, and it will not be until the beginning of the 20th century that it passes to the state and is restored. Declared an historic artistic monument in 1922.

This building was a Alhóndiga, founded by Muhammad V. Place of shelter and store of merchants and traders arrived from distant places. After the conquest it was inn, store of carboneros and corral of comedies. Declared National Monument in the nineteenth century. In 1933 it passed to the state, being restored and incorporating to the patrimony of the city. The most impressive feature of this building is its magnificent horseshoe arch entrance that leads to the zaguán (foyer) and  the  fountain in the centre of the courtyard.

The Bañuelo or Baño del Nogal, was declared National Monument in 1918. It is composed of three rooms, preceded by a house with a small courtyard. The cold, warm and hot rooms were built with reused Roman , Visigoths and Caliphs elements. The first room to enter would be the cold room or bayt al-barid; the next room, the hot or bayt al-wastani, is the most spacious of them all. Although this bath has been considered as a construction of the eleventh century, because of its typology that is very similar to those of the Nasrid period, it can be considered of a much more advanced period.

The Horno de Oro house, built at the end of the XV century, and transformed after the castillian conquest, was a palatine residence. A rectangular courtyard with a reservoir centers the building, establishing the rooms on the shorter sides. The typical nasrid arcades of the courtyard argue an arcaded gallery.

Andalusi Monuments can be visited with the same tickets and with a single price.

Sundays the tickets is free for all the Andalusi Monuments.

Access to the Palace of Carlos V, the Museum of the Alhambra and the Bath of the Mosque, is free. 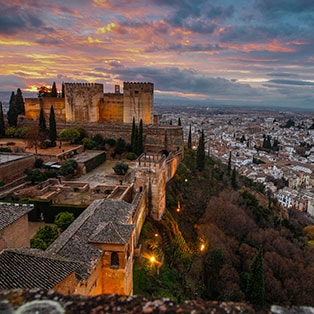 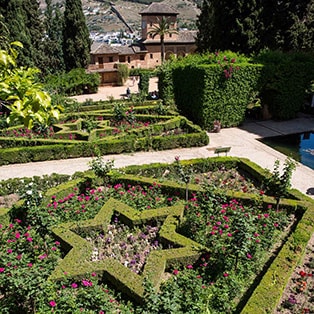 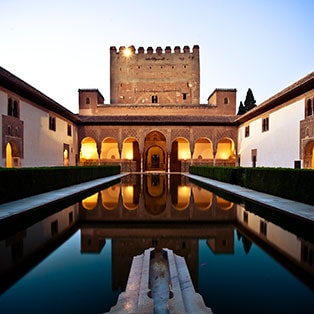